Grid Planning in the Urban Design Practices of Senegal 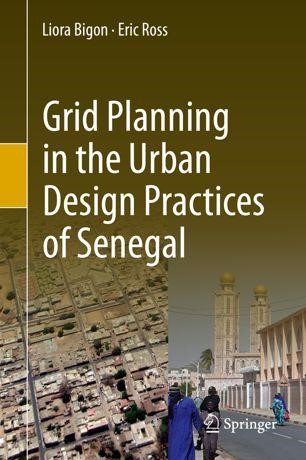 This book explores the entanglement of African and Western cultures of grid planning in urban Senegal from pre-colonial times up to the present. The most important and significant urban centers of historic Senegambia and modern Senegal, a mostly Muslim country of West Africa, are examined. What is revealed is a continuous deployment of grid planning in the configuration of towns, villages, neighborhoods and cities since the sixteenth century. Both endogenous African and exogenous colonial traditions of grid planning have been used, simultaneously but often quite separately, to lay out settlements. The indigenous Senegambia grid plan first characterized elite pre-colonial settlements, such as royal capitals and centers of Islamic instruction, before it was popularized and mass-produced by Senegal’s mystical Sufi orders during the colonial era. This autochthonous tradition culminated in the mid-twentieth century design of the great shrine city of Touba. The French grid plan, for its part, characterized nearly every type of colonial settlement, from mercantilist ports like Saint Louis to the prestigious colonial spaces of Dakar, capital of a French empire in Africa, to enumerable peanut marketing rail-towns (escales). Though the two grid-planning traditions were initially quite distinct in origin and symbolic significance – royal prerogative, Islamic propriety or efficient exploitation of the land and control of its people – they have become inextricably entangled with each other over the course of history. This book explores this entanglement in order to: (a) create a truly global urban history to replace the otherwise Eurocentric meta-narrative of urban planning and design; (b) enhance Islamic Studies by situating sub-Saharan Africa’s urbanism within mainstream research on the Muslim World; (c) shift the discussion from a determinist genealogy of vernacular versus Western urban patterns towards a more dialectic, entangled and processual approach to the production of space; and (d) highlight the role of African agents in shaping the continent’s cities, even at the height of formal colonialism. The book is primarily intended for scholars engaged in the fields of urban history, architectural and urban planning history, world history, African studies, Islamic studies, urban geography, cultural studies and art history.

Trackback from your site.